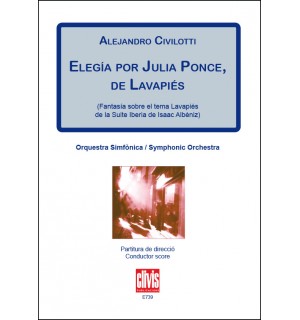 This work of Civilotti shows remarkable imaginative individuality, with a stable emotional atmosphere, and  management of unreleased sounds that trap the attention until the end.
Jorge Aráoz Badí

This piece was written in memory of, and as a homage to, Julia Ponce, the maternal grandmother of the composer. Her life had a tough and tragic beginning; shortly after her birth, she was abducted by her father and until she was 12 lived in the well-known Lavapiés district of Madrid, from where they emigrated, like so many others, to Argentina. She never knew her mother or returned to her native neighborhood. Her personal story is almost film-worthy, which she explained at the end of her life as if it were some great adventure.

The composer of this score, who would later emigrate in reverse, from Argentina to Spain, was unable to say goodbye to his much-loved grandmother but wanted to record her memories and feelings through sound, taking a very free approach to the music that composer Isaac Albéniz dedicated to Lavapiés, the Suite Iberia.