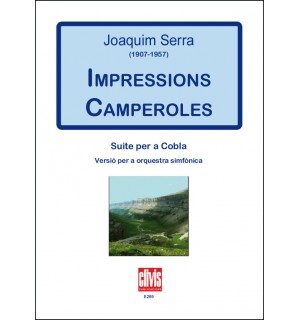 Impressions camperoles (Rural Impressions) was originally written for a cobla in a descriptive style which perfectly showcases the clear, natural language of this Empordà native.

It was written in 1927 and won the Sant Jordi prize for the Promotion of the Sardana Dance in Barcelona, winning the same prize the following year with the Glosa del Ball de Gitanes del Penedès (Dance of the Penedès Gypsies).
The titles of fi ve movements hint at the musical content of each one, the most notable one being La vall dels ecos (The Valley of Echoes) for its innocence and effectiveness.
The symphonic version, written by the composer himself, came ten years later. We should remember that as a result of the Spanish Civil War, the Pau Casals Orchestra, which used to give regular concerts in Barcelona, performed for the last time on 12 July 1937. In the seven years that elapsed until it was performed by the Municipal Orchestra conducted by Eduard Toldrà (on 31 March 1944), Barcelona was able to enjoy very few symphonic concerts. Even so, some ensembles tried to fi ll this gap, such as the Catalan Symphony Orchestra (OSC), with which Joaquim Serra premiered on 8 January 1938 the orchestral version of Impressions camperoles, which had been orchestrated the previous year under the supervision of the composer.