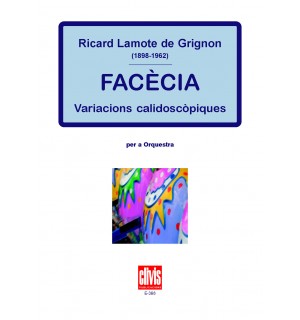 The work Facècia reflects the humorous and light-hearted nature that the title announces but the latter conceals a very elaborate work based on variation and counterpoint. The original piece hails from Ampurdan in Catalonia, and is dealt with ten times, using traditional variation resources: extension, diminution, retrogression, inversion, glosa, etc.

This work, composed for a full symphonic orchestra, could well represent Ricard Lamote de Grignon most laborious project due to the technical rules that he himself imposed. Despite the fact that upon listening to this work, it fits perfectly with the title (they are happy and playful variations on a popular piece), the composer’s work is both meticulous and perfectionist. The work reflects the humorous and light-hearted nature that the title announces (it is after all a farce) but the latter conceals a very elaborate work based on variation and counterpoint. The original piece hails from Ampurdan in Catalonia, and is dealt with ten times, using traditional variation resources: extension, diminution, retrogression, inversion, glosa, etc. But Lamote de Grignon also imposed a kaleidoscopic game on the piece: maintaining the central piece throughout and observing it through a game of mirrors in such a way that every time the piece submerges, it is accompanied by one of its transformations. The leading role in this work is occupied by the different sections of the orchestra, with significant offerings from the harp and celesta, which enlarge the distinctive orchestral colour of the score.
Without losing sight of the humorous nature of this music, we can observe yet another playful element: the work begins with a brass choir that performs the notes F, A, C, E, Ci(s) and A, corresponding to the letters of the work’s title. This same theme appears at the very end of the piece, before the final chord, performed by four horns in unison. Just before this offering though, the string section performs (also in unison) the notes Fi, D and E – fi de meaning end of in Catalan, hence the piece announces its own end: Fi de Facècia or End of the Farce. A brilliant way of expressing good humour to compose good music.
The work was finalised after years of work on the 15 July 1936 and was performed on the 12 June 1938 in the Palau de la Música Catalana by the National Concert Orchestra, conducted by the composer himself. In that year, Facècia was awarded with the Juli Garreta Award.