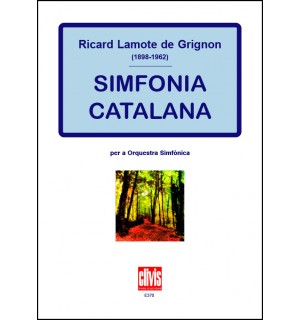 The Catalan Symphony by Ricard Lamote de Grignon is a magnificent piece of music some 40 minutes in duration and structured into four movements; one with a generous instrumentation while at the same time being full of detail.

The first large-scale work produced by Ricard Lamote de Grignon after his Valencian period was the Simfonia Catalana (Catalan Symphony), which he completed, according to indications found on the manuscript itself, between May and July 1950 and dedicated to Marquès de Lozoya.
In the words of the composer: “It is a piece with a classical architecture, ample proportions, [and] its content is wholly romantic. From start to finish, it features an uninterrupted melodic line, derived to a greater or lesser extent from our folk lyricism, which, especially in its fourth movement, gives rise to the most varied counterpoint combinations. The choral theme, played by trombone and heard in the opening bars of the symphony, and after being notably transformed in subsequent pages, reaches its maximum expression in the final bars of the score, given form through the strident voice of clear metal, in a luminous ray of sound”.
Essentially, what we have here is a magnificent piece of music some 40 minutes in duration and structured into four movements; one with a generous instrumentation while at the same time being full of detail. That the piece’s title includes the qualifier “Catalan” is justified by the nature of some moments found within it, moments of a uniquely Catalan flavour, as well as by the refrains of folk music present in the final movement. The melody lines have been developed in a way that is highly original, unpredictably so, and both the presence of modal harmony and its brilliant counterpoint wealth stand out in equal measure.
In the documentation consulted, three performances of this piece are listed as having the composer holding the baton. The first, the debut performance of the Catalan Symphony, was held at the Palau de la Música Catalana on 26th October 1956. The second was given on 16th December of the same year, and the third on 11th June 1961. The day after the debut performance, Zanni wrote a review for La Vanguardia newspaper, saying the following: “The Symphony does not cause any moment of fatigue. Quite the opposite, it sustains one’s attention and, above all, approval at every turn. Ricardo Lamote, who conducted the piece with great care and skill, and the orchestra, impeccable in its not inconsiderable feat, were greeted with prolonged and heartfelt applause”. It has recently been played on three other occasions, twice in 1998 and once in 2010 under the baton of Salvador Brotons.