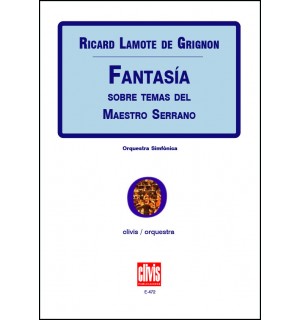 Ricard Lamote de Grignon does not use the composer José Serrano's most popular melodies to do Fantasía, but places less well-known fragments on the stave.

Ricard Lamote de Grignon does not use the composer José Serrano's most popular melodies to do Fantasía, but places less well-known fragments on the stave. Fantasía starts with the themes of the tempest from the La infanta de los bucles de oro Zarzuela, it continues with the song that envokes the Twelfth Night procession in Noche de reyes, then the theme Los leones de Castilla and the Hungarian song Alma de Dios appear. Perhaps the most famous fragments are those which Lamote uses to finish Fantasía: the marcha mora and other melodies from the second scene of the Moros y cristianos Zarzuela.
Valencian José Serrano (1873-1941) was one of the last artists of the famous golden age of the Zarzuela, bringing together the legacy of great maestros such as Ruperto Chapí or Amadeu Vives. Serrano, the son of the conductor of the Sueca band, studied violin and composition in Valencia and then settled in Madrid. He composed his first Zarzuela El motete in 1900. After La reina mora (1903), the commissions flowed in, some of which have become not-to-be-missed titles in the history of the Zarzuela, including Moros y cristianos (1905), Alma de Dios (1907), La canción del olvido (1916) and La Dolorosa (1930).