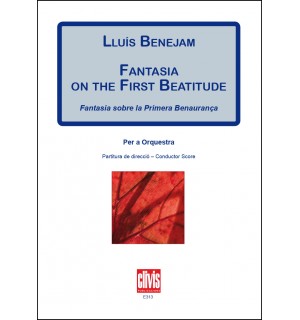 Fantasia on the First Beatitude

This work is brilliant, energetic, at certain moments impressionist, at others polytonal or influenced by the language of jazz, it clearly evinces the spirituality of its composer.

Fantasia on the First Beatitude is a symphonic poem written by Lluís Benejam in the summer of 1965. During the last years of his life, Benejam worked at the University of Montevallo and the Birmingham Southern College as a lecturer on composition and instrumentation. That privileged setting allowed him to make use of the very extensive and active symphony orchestra services which meant that the vast majority of his symphonic work stemmed from that period. He not only composed original works for orchestra during that time, but also took advantage of the opportunity to work on the symphonic instrumentation of his previous works, such as the Sonata for the saxophone which he turned into the Concert for saxophone and orchestra in 1967.
The Fantasia on the First Beatitude is one of his finest works: brilliant, energetic, at certain moments impressionist, at others polytonal or influenced by the language of jazz, it clearly evinces the spirituality of its composer, a sincere follower of Christianity, which had caused him numerous problems in republican Barcelona during the fascist uprising.
The First Beatitude of the Evangelist according to St. Matthew, proclaimed by Jesus in the Sermon of the Mount, says: “Blessed are the poor in spirit, for theirs is the Kingdom of Heaven”. This sentence inspired Benejam to compose a thirteen-minute piece which provides a musical refl ection on the blind eye that the world turns to poverty, on the void in the spiritual world and other aspects indicated in the score itself.