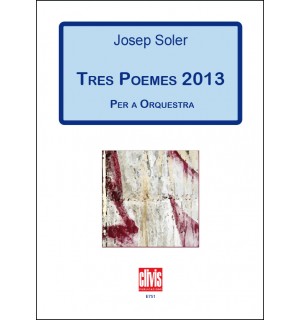 The Three Poems for Orchestra 2013 form part of a giant dramatic puzzle which spans the entire creative life of Josep Soler, running parallel to the spiritual obsession that imbued his thoughts:

Jesus of Nazareth is an opera/oratory that was started in 1974 and has been constantly and successively added to, which Agustí Bruach¹ referred to as a “great evangelical musical commentary”, which we might also classify as a liturgical drama. However, the fi gure of Jesus that inspired it transcends the gospels and this work underlines this fact, because the second poem – Landscape with the Rest on the Flight to Egypt – is based on an engraving by Rembrandt, while the third – Jesus’ Encounter with his Mother – is a scene that does not even appear in the gospels but can be found in the visions of the mystic Ana Catalina Emmerick.
The orchestration used by Soler in this case is very simple and the score is almost chamber-like in many passages, imbuing it with the intimate atmosphere that the composer was seeking, with occasional appearances of a light percussion which does not occur in other moments of Jesus of Nazareth. In the prelude, a slow tempo predominates along with indications of pianissimo – with very few exceptions of fortissimo that appear as brief and violent convulsions – which is also the case in the two following movements.
The organ plays an important role, which has become more and more common in his works: this should be interpreted as more symbolic than ecclesiastic, leading to a sacred and non-confessional place, serving as a mediatory character in the face of the tragic denouement of Jesus, who announced the arrival of the Kingdom of God, and yet in its place came the Church. This same dramatic need led the composer to use, at certain points, tessituras as uncommon as a D sharp (scored) with the instruction of fortissimo to the horns; despite this, it is no more diffi cult than what Strauss demanded towards the end of The Legend of Joseph, the premiere of which was more than 100 years ago.