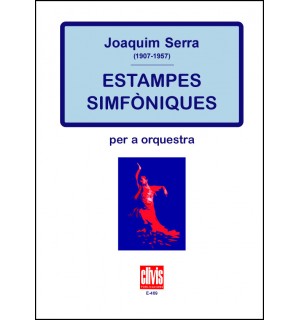 Estampes Simfòniques has two parts: Danza Gitana and Fiesta Andaluza. The second movement is structured around a nocturnal air, while the centre of the first movement contains a habanera rhythm.

Joaquim Serra dedicated most of his abilities as a composer to music of traditional and popular roots. He did not only exceed in composing original Catalan music but, his music instrumentations of the land have been recognized worldwide. The diptych Estampes simfòniques (Symphonic Images) would not be a unique piece in its production if it wasn’t because in this occasion the music inspiring the score is not traditionally Catalan but Andalusian.
This piece of work composed in 1954 is his last incursion in the world of symphonic orchestra. It was commissioned by his dear friend, concertmaster of the Council Orchestra of Barcelona and director of the Symphonic Orchestra of Barcelona, Rafael Ferrer, who while director happened to be recording a record of Andalusian music and got in touch with Joaquim Serra, resulting in this piece of work titled: Estampes Simfòniques which has two parts: Danza Gitana and Fiesta Andaluza. The record, titled Piezas andaluzas and edited by Vergara, was completed with music of strong Andalusian spirit and signed works of different authors such as Chueca, Sainz de la Maza or Ferrer himself.
The work of Joaquim Serra is, therefore, circumstantial, and he didn’t even register it in the catalogue that he himself had of his works. His great ability to orchestrate is present in it and in the brilliance of these Andalusian pages one can also breathe a certain Mediterranean flavour. The second movement is structured around a nocturnal air, while the centre of the first movement contains a habanera rhythm. This first part of the work was named in the record Variaciones sobre El Garrotín referring to the inspiring theme, a popular song of gypsy origin.