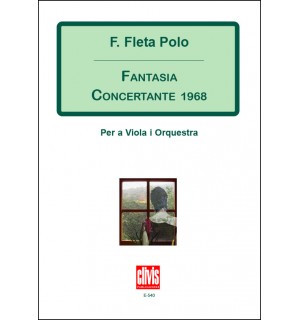 Francisco Fleta Polo’s Fantasia Concertante per a viola i orquestra (Fantasia Concertante for Viola and Orchestra) is one of its author’s favourite works. Not only does it turn around his favourite instrument – the viola – but it is also dedicated to his daughter Isabel. The piece was first released in the original viola and marching band version first played by Barcelona Municipal Band in the year 1994, with Aureli Vila as its soloist, and in 1992 with a young player Francesc Gaya. The orchestra version has involved a thorough adjustment by the author to adapt it idiomatically to the instruments required. From among these adjustments, the use of the string section is particularly worth mentioning: the first desk of each section acts as soloist, with two-voice parts, while the other strings act as ripieno, also with the corresponding divisi. The strings are therefore often presented as 20 separate voices, as is the case of the introduction. Although the rest of the orchestra isn’t particularly large, is it enough to perform the timbre games which characterise the composer’s orchestral language. In Fleta’s language, freedom manifests itself in the first few bars: carrying out a tonal analysis of his music becomes difficult, and the listener is surprised by the ease with which it gradually develops. Melodic fragments contrast with more rhythmic ones and with good-humoured touches provided by his use of the various instruments (especially the percussion section).
The piece, which is structured as a single movement, fits perfectly into the fantasia genre: a free discourse from the solo instrument which, in spite of being based on an initial theme, includes various themes by way of improvisation. It starts with an introduction involving the whole orchestra, in a tempo shown as Religioso solenne. The solo viola appears with an Allegro and does so in the instrument’s lowest register. The piece’s dynamic leads to a playful fragment, a Scherzando, itself flowing into a Fugue. This classicstyle fugue is of remarkable formal beauty: in addition to presenting an academically perfect structure with the theme introduced by the bassoon, first entry from the clarinet, second entry from the solo viola and third entry from the flute, the orchestra’s interventions reinforce the different parts of the fugue with timbre games of great beauty. The Fugue gives way to a new Scherzando which paves the way for the solo instrument to perform a lyrical cadenza taking full advantage of its tessitura. The piece climaxes with the rhythmic intervention of the viola in double stops, accompanied by few instruments. The orchestra gradually gains in intensity and numbers until it becomes the protagonist. When the viola reappears, it does so with the initial theme leading to the Religioso solenne, this time with the soloist playing the main part. The piece concludes with a viola arpeggio culminating in a fortissimo top A to which the orchestra responds with a chord which fades into nothingness.