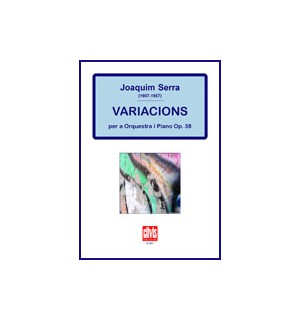 Variacions per a orquestra i piano

Variations for orchestra and piano op. 38 belongs to the symphony/concerto genre, with a brilliant piano part that weaves a continuous discourse through a series of virtuosic sections. It is presented and organised as a theme and five variations that make up an organic whole.

Variations for orchestra and piano op. 38 is a concerto that was written in 1931 at the peak of the composer’s most fruitful and creative period in the prime of his youth.
This piece belongs to the symphony/concerto genre, with a brilliant piano part that weaves a continuous discourse through a series of virtuosic sections. It is presented and organised as a theme and five variations that make up an organic whole. In this way it is similar to the symphonic forms that were written as a continuous piece (several movements that run together), which is characteristic of some of the great works of the 19th and 20th centuries. In this piece, the variation forms the architectural framework, as the compositional method is free variation. It is a cyclic work in which the composer shows a great deal of skill in every way, bringing together elements that he had experimented with in earlier works. The use of romantic expression and new harmonies with colour, whilst keeping to traditional tonal functions, all set within classical phrasing and structure, were all characteristic features of his, by then, clearly defined style. It is fair to say that a great range of influences and traditions can also be seen in his work, from the Classical period to contemporary works: from the Germans, he takes the large-scale form and orchestral density; from the Russians, the instrumental colour and certain thematic and rhythmic aspects (as in the 2nd variation, which is clearly Prokofievian); from French impressionism, the harmonies, textures and timbric subtleties; and from Catalan music, the melodic and rhythmic cadence (especially in the 5th variation) and the clever use of the free, linked, cyclic variation, which is so widely used in the glosa for cobla (Catalan band).
This work was recorded by Naxos in 2000, with an excellent performance by the Vallès Symphony Orchestra, conducted by Salvador Brotons, with Emili Brugalla at the piano.