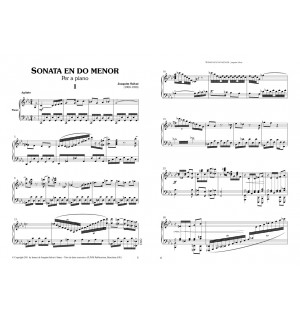 The Sonata per a piano en Do menor (Sonata for Piano in C Minor) by Joaquim Serra is divided into three movements and, from an aesthetic point of view, takes few risks, yet it possesses an unquestionable brilliance and beauty.

Joaquim Salvat (Barcelona 1900-1938) is one of those Catalan composers who, in recent years, we have been gradually rediscovering. He died young, and his output was not huge —around twenty songs, some chamber works and a single symphonic piece— but the Noucentista air and the legacy of Modernism are very much present in his music. This element of authenticity is not easy to find in other composers of that era who searched for inspiration in more distant aesthetics. His works are comparable to those of Manuel Blancafort, Enric Morera, Eduard Toldrà and the Lamote of Grignon, all very much contemporaries of Salvat who also imbued their works with this very elegant, Catalan character. If they have ever been criticised it has been for this very reason: for prioritising elegance, good taste and formal and harmonious precision above expressiveness or the search for new paths.
The Sonata per a piano en Do menor (Sonata for Piano in C Minor) reflects this model and, from an aesthetic point of view, takes few risks, yet it possesses an unquestionable brilliance and beauty. The first movement starts off with a theme that could well be used for a sardana: rhythmic, binary, rousing and with a melodic pattern that is rooted directly in our popular musical heritage. The second movement starts with a series of vertical chords which serve as an introduction to a wordless song which also seems to have been borrowed from the popular songbook, and is presented alongside various resources, some of them most original and effective. The third movement is a thrilling, rhythmic score, full of energy and virtuosity based on the rhythmic formula that was introduced in the first bar and is repeated through to the end of the work with some truly spectacular moments.