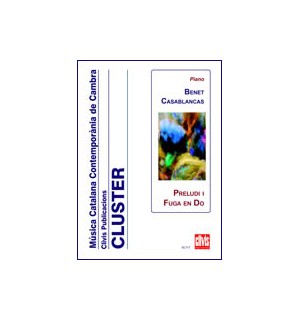 Preludi i fuga en do

The Prelude and Fugue in C by Benet Casablancas is the first in a long series of piano compositions by this composer. Despite being a rather green, beginner’s score, it provides an interesting introduction to his body of works for piano.

Written in 1976, the Prelude and Fugue in C is the first in a long series of piano compositions by this composer. Despite being a rather green, beginner’s score, it provides –in the words of Víctor Estapé– an interesting introduction to his body of works for piano which, despite the enormous differences between it and the more mature musical discourse of the composer’s later works, reveals his search for structural integrity and a concern for craftsmanship in its solid contrapuntal writing. The future musical personality of Casablancas can be seen more clearly in the serene unrest of the almost Expressionistic Prelude –an enigmatic movement in which the lilt of an unmistakably personal voice is let through– than in the almost Hindemithian neo-Classicism of the Fugue, but in this study in polyphony we can already see signs of a young composer who imposes exceptionally high standards for the quality of his own compositions. Although his more mature works show an increasing virtuosity and an extraordinary wealth of detail in their texture and use of harmonic and polyphonic resources (inspired at all times by the richness and gestural dynamics of the piano as the factors underpinning the musical structure), we can, in the simplicity of these pieces, perceive the composer’s already- developed taste for short and concentrated forms –Epigrams, Aphorisms, Haiku–, which will go on to be one of the central axes of the composer’s musical thought.