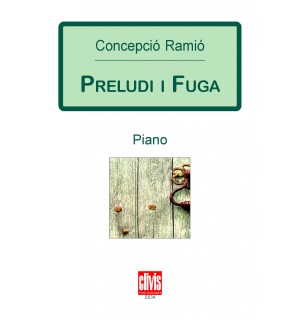 This is a moderately difficult piece for solo piano with virtuoso touches.

Preludi i fuga is a medium-high difficulty piece for solo piano with virtuoso touches, which is composed within the tradition of the genre.
Its discourse is registered in a language that pushes the boundaries of the tonal canons with a high level of chromaticisms. And this is not only due to the use of the base chromatic scale but also the intended recreation of late-Romantic tones that are only resolved (and within an abruptly traditional outline) in the last two bars.
The Prelude, presented in fantastic terms, conventionally puts forward the basic elements which will constitute the Fugue. The Fugue is formally strict and constructed in a “speculative” way, which is intentionally and audibly architectural and here becomes a tribute to one of the most noble and venerable forms of our Western tradition.