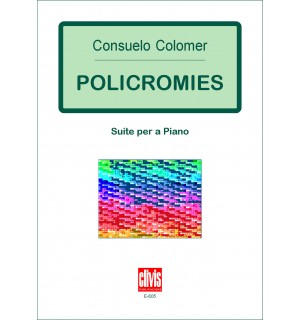 Policromies (Polychrome) is a suite for piano composed under a true rainbow of emotions.

Policromies (Polychromes) is a suite for piano composed under a true rainbow of emotions. The first movement experiments with the search for feeling and colour with a specific restriction: avoiding one of the seven musical notes (in this case, F). The second movement is a short fantasia that aims to say, express and also incite a feeling of freedom to convey gratitude and effect with a smile. The third part evokes the simplicity of a dialogue that arises from a brief meeting on the way. The fourth movement is a question about the feeling that prevails after a meeting: it may be surprise, emotion or even nostalgia… The work’s fifth movement is a rondo, whose notes come across different expressive moments in which you have to become absorbed (like when the left hand murmurs and envelops the musical discourse). Finally, the last movement raises an inevitable goodbye, which is profound and sad yet strongly linked to a thread of hope.