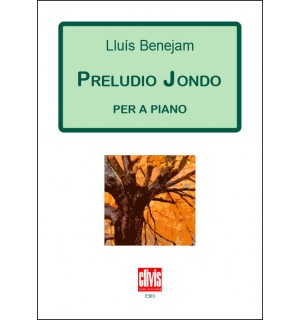 The Preludio Hondo by Lluís Benejam is a short piece which exudes happiness in 217 intense bars that make this work a real treasure.

Among Lluís Benejam’s output, work for the keyboard came little and late. This comprises three preludes; the first one, entitled Preludio Hondo (Deep Prelude) dates back to 1961, the second Preludis Ibèrics (Iberian Preludes) to 1965 and the third Prelude for a Wedding was written in 1967 on the occasion of his eldest daughter’s wedding, all composed during his time in the United States and shortly before he died.
Despite the fact that Preludio Hondo is the oldest, it was not published until summer 2011 when it was premiered by pianist José Menor.
It is a short piece which exudes happiness in 217 intense bars that make this work a real treasure.