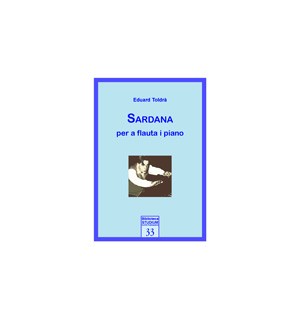 Sardana per a flauta i piano

We discover in this simple sardana da camera the precocious interest which Toldrà felt for a genre in which he was to become an authentic maestro, and the hint of some of the stylistic features which defined the Catalan composer’s personality.

Sardana for flute and piano has the special interest of being the first work which Eduard Toldrà composed, or if nothing else, oldest of those which have been preserved. Previously unpublished because of the self-criticism which characterised the musician and which brought him to, for example, forbid the publication during his lifetime of many of his earliest songs, nevertheless, we discover that in this simple sardana da camera that shows us on the other hand the precocious interest which Toldrà felt for a genre in which he was to become an authentic maestro, the hint of some of the stylistic features which defined the Catalan composer’s personality; the first of which is the very quality of diatonic melody in the solo part, light and developed with complete naturalness across a movement preferably by related degrees, and supported on a static harmony in A Major which marks the general immobility of the first section of Curts –shorts–. On the other hand, in the Llargs –long– movements the piece livens up thorugh a series of procedures – sketched here in a still very elemental form– that Toldrà frequently reserved for the central parts of many of his songs; a more intense tonal instability such as the apparent change of mode of the main key and which soon becomes a contrast between C Major and C minor at the very beginning of the second movement; the concern to distinguish between various levels of dynamic values and lastly the overbearing necessity to resolve it quickly all in the expressive force of the song –with the indication of com una cançó –like a song– which opens immediately afterwards in A Major again over the characteristic rhythm of the sardana on the accompaniment. Altogether it is, if you will, naïve but nothing appears improper. We would say that the very discretion of the means employed and the accurate sense of this limitations in a young violinist of 16 years old, who that very year of 1912 presented the Renaissance Quartet with three friend of his – preserve the Sardana for flute and piano and swathe it in an innocence, freshness and natural joy which we sincerely believe deserve to see the light of day.