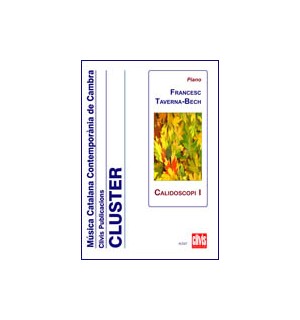 The eight short movements of Calidoscopi I by Francesc Taverna-Bech emerge around a set of twelve sounds –almost never followed in the original order– and a rhythmic motif.

This pianistic cycle, originally made up of seven pieces, was composed between 1977 and 1979, and was later extended with a prelude of sorts. Cuban pianist Alberto Ràfols debuted the cycle in 1982 at the Conservatori Superior Municipal de Música of Barcelona.
The eight short movements it is currently made up of emerge around a set of twelve sounds –almost never followed in the original order– and a rhythmic motif. Both elements develop a series of sound images which, although at times can resemble a variation, are closer in nature to the images created with light in a kaleidoscope.
In 1979 I composed a version for quintet (flute, clarinet, piano, violin and cello) –based on the prelude– which was debuted a few short months after it was completed, much before, therefore, the original version for piano.