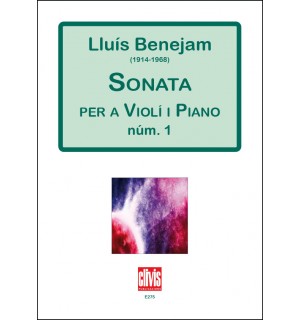 Benejam was an excellent violinist and also an excellent composer. It is therefore hardly surprising that the works he dedicated to this instrument are of the most exquisite quality and discernment.

Benejam’s chamber music work for violin and piano includes four pieces: three sonatas and an Adagio and Allegro. The first two sonatas were written in 1951 and 1959, while there is no accurate date for the third one (although it is almost certainly from the 1960s) which did not see the light until summer 2013 when it was found in the University of Montevallo, where the composer’s legacy is held.
Sonata for the Violin and Piano No. 1 was one of the first works that Benejam composed (in the spring of 1951) or, if not, it was at least one of the first he was confident enough to put on in public. The composer was now 37 and he had built up considerable experience and strength-in-depth as a performer of symphonic and chamber music. This work already features some of the characteristic musical language traits of the composer: a constant rhythmic impetus, soaring melodies, chromatic accompaniments, a wealth of backbeat, impressionistic spins, a perfectionist approach to structure and the use of the whole tessitura and other resources of the instruments for which he wrote.