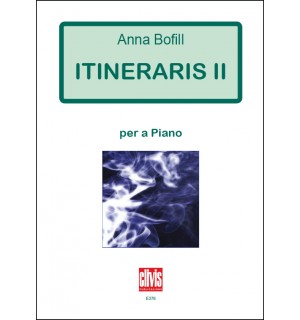 The sea (Onades i roques and El blanc i el blau) and the desert (Tres Terres) are topics that have inspired the music for piano of Anna Bofill, of these two volumes Itineraris (Itineraries); also literature and poetry (La nit, Tocs de fum and Dansa oblíqua) are immersed in the colors and rhythms of these pieces with diverse routes.

El blanc de blau (White from the Blue) is a special composition written about Quima Jaume. A great woman poet and friend who lives in the memory of conversations, musical auditions, and walks by the seashore in Cadaqués, while we observed the lovely blue sea, suddenly turn into white, like the sounds from winter storms.
Tocs de fum (Touches of Smoke), although paying homage to Maria Aurèlia Capmany and Simone de Beauvoir, both showing common aspects of their personality, it is written particularly thinking about the former, a writer who smoked cigars. The cigar smoke is the natural element that provides the graphic image for the nature of the sounds that flow throughout this piece. It contains four parts that ensemble four different manifestations of the smoke particle's aleatory ways, and at the same time correspond to this woman's attitude (strong step!) on life. A woman who contributed so much, with he work, to the feminist cause.
To complete the short pieces collection has been added in this album  En un Chassaigne Frères negre de mitja cua, work of 1983, that also it was interpreted in the mentioned first cycle of Cartografies del desig.