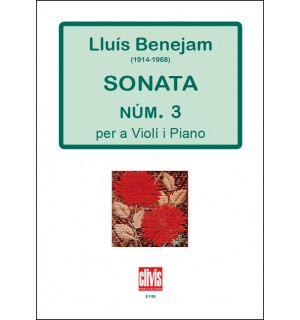 Sonata per a violí i piano núm. 3

This is a mature and solid work in which the author once again demonstrates not only his knowledge of the possibilities of the solo instrument but also of the chamber music language.

Up until now, the catalogue of Benejam’s sonatas for piano had just fi ve titles: two for violin, one for viola, another for the cello and the fi fth for the saxophone. In the summer of 2013, however, a new sonata for violin and piano was found among the microfi lms of the National Library of Catalonia, having come from the library of the University of Montevallo where the writer’s legacy was lodged. Shortly afterwards, another sonata – this time for solo piano – appeared among the family’s papers in the United States.
On the occasion of the centenary of Lluís Benejam, therefore, the catalogue of sonatas now has seven titles. The one you have here is the score of the Sonata for violin and piano no. 3, which was given this number because it was the third to be published, even though we cannot put an exact date to it or guarantee that it was the third to be composed (the first two date from 1951 and 1959 respectively), even though everything points to this being the case.
This is a mature and solid work, like the two previous sonatas for the violin, in which the author once again demonstrates not only his knowledge of the possibilities of the solo instrument but also of the chamber music language. The first movement dives straight into the subject matter: with no introduction or prelude, the melody immediately takes flight over the static chords of the piano. The central part includes a rhythmic motif, but the movement stands out for its great lyricism. The second movement is a moving adagio which contrasts with the lively nature of the final movement, a scherzo full of rhythm and colour which plays constantly with the initial motif.