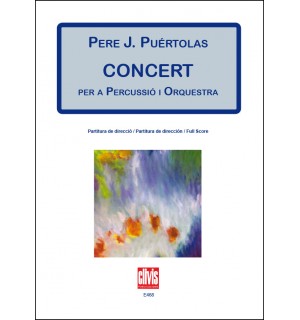 Concert per a percussió i orquestra

The Concert for Percussion and Orchestra by Pere J. Puértolas is a concert with a classical bent in three movements: Allegro, Andante moderato and Allegro con fuoco, and the brilliance of the soloist and, indeed, the whole orchestra is evident from the first few bars.

I wrote this concert at the specific request of my friend, the percussionist Xavier Joaquin, so it could be premièred with by the OBC (Barcelona Symphony Orchestra).
Xavier wanted a major concert that would showcase most of the potential of classical percussion. Thus with the exception of the drums – which are in the orchestra – most of the instruments are featured. This means the solo part is extremely complex in terms of its technical challenges, not to mention the logistical difficulties involved in the distance between the instruments and the player’s ability to reach them.
Once the concert was written we shut ourselves off in a farmhouse for a week to simulate the position of each instrument exactly as they would be on the stage. We had to change a lot of things to ensure that the flat instruments such as the gongs and the set of bells, which take up a lot of room, were within the reach of the soloist. Putting them all together was a huge challenge, and playing them almost an odyssey. But we were both pleased with the result of the layout of instruments and we designed the solo scores for three strategically-positioned music stands.
Also at Joaquin’s instigation I transcribed the concert for a Concert Band, but his premature death meant that this version was shelved and was only recovered with a different orchestration some years later.
Version for Percussion and Concert Band
This concert is a new orchestration of the Concert for Percussion and Orchestra that was commissioned by the Barcelona Municipal Orchestra in close collaboration with soloist Gratiniano Murcia.
It is a completely different version from the first one, which was still unpublished, and was written specifically for the Barcelona Municipal Orchestra.
The number of instruments, their layout, the evolution of the cadences and even some parts of the original work were changed, keeping the same structure of a classical concert.
This work with Gratiniano Murcia was extremely thorough, as it had been with Xavier Joaquin, because in spite of the reductions this was still a very complex concert that required absolute mastery of every aspect of percussion.