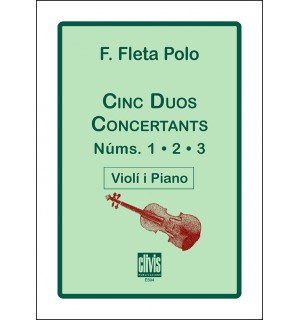 This work is the first volume of the Cinc duets concertants per a violí i piano (Five concertante duos for violin and piano) edition, including the first three of the series. It includes short but intense, expressive and idiomatic works which move through different airs, tempos and rhythms. The author is a real expert in the instrument he composes for and he knows how to exploit its possibilities in a way that is not at all forced.

The first duet is a Moderato movement where the melodic line features both extensive intervals and very marked rhythmic fragments; the second duet is a theme with four variations (another genre that recurs frequently in Fleta’s works) and the third duet presents movements with the air of a dance. The first is dedicated to his children, violinists Andrés and Luís and to the pianist Isabel, whilst the second duet is dedicated to his pupil, Vicente Garrido.