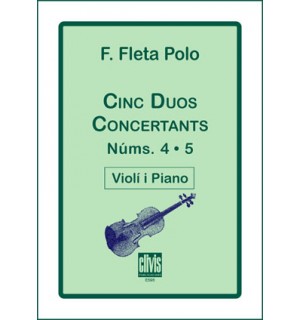 Five concertante duos for violin and piano 4 and 5 are dedicated in memoriam of Francesc Puertas, a great friend of the composer since the time they studied together in the Conservatory of Barcelona (they both graduated in violin, viola and trumpet), and the predecessor of a lineage of musicians. Far from conjuring the absent friend through nostalgic memories, the nature of the duets conveys the strength and energy that they shared when making music.

Duet number 4 presents an initial movement in which an arpeggiated figure alternates with a rhythmic theme in double chords, whilst the second movement stands out thanks to the use of the violin’s entire tessitura. Duet number 5, which is also in two movements, presents an Andante with a predominant, extensive melody, and a last movement with a pronounced rhythmic nature and an intense and emphatic end.