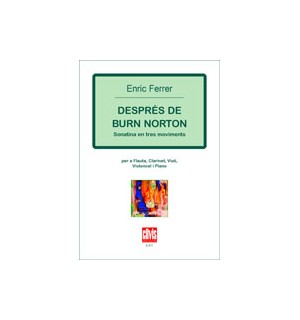 This Sonatina is inspired by the first of the Four Quartets by T. S. Eliot, Burn Norton.

After a short stay in Olomouc (Czech Republic) in 1997, I started working on this Sonatina that is inspired by the first of the Four Quartets by T.S. Eliot, Burn Norton. It is a very loose inspiration yet it maintains a firm link with that wonderful poem. I wanted to base it on the original English text with its phonetics and accentuation (hence all the related material), but my knowledge of the language was not sufficient to understand it precisely. That is why I used a bilingual edition (English-Catalan) from Laertes publishing house, with a translation by Àlex Susanna. I would also like to point out that Eliot’s poem served as the inspiration for the composition of this work but it does not appear in the score. My intention was to reflect the words of Eliot in the music without necessarily hearing them, in order to capture its sensitivity, perform it well and ensure that the listener will grasp its meaning.
It is a work in three movements. The flute does not make an appearance in the second, which creates a change of tone against the first and third movements. When performing this work, I would like to simply ask that you take each and every one of the nuance and tempo annotations into account. These will make for a recreation (or interpretation) that is full of expressiveness and content.
Within my career as a composer, Després de Burn Norton (After Burn Norton) constitutes a very important step in my obsession of making my music reach performers and consequently audiences, without renouncing any of my creative ambition.
The work lasts approximately fifteen minutes and has undergone several instrumental transformations. This present version is the definitive and only version to be performed.