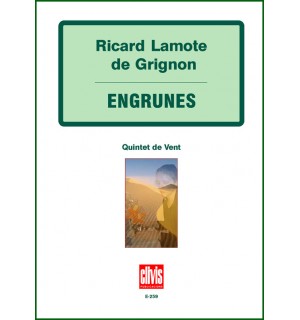 It was originally a collection of twelve short pieces for piano. This version consists of six «crumbs» and the author transcribed it from the original for piano more than 25 years later.

Engrunes (Crumbs) was the first work Ricard Lamote de Grignon wrote between 1922 and 1923. It was originally a collection of twelve short pieces for piano. The work, dedicated to his fiancée – Montserrat Coll i Oriol, who would soon be his wife - forms part of the series of piano teaching collections that the composer wrote throughout his life. This small works, however, go beyond the strictly teaching value for which they were created and, when they are performed in concert, they are reborn as small and very valuable musical jewels. Some of them have been adapted for different instruments or groups, such as string orchestra, or even played on the tubular bells at the Palau de la Generalitat de Catalunya in Barcelona.
This version consists of six «crumbs» and the author transcribed it from the original for piano more than 25 years later.
Ricard, as assistant to his father, had acquired an absolute mastery of arrangement for bands, so doing this for a wind quintet was nothing new for him.
The date and venue where the work was premiered are unknown, but a programme is preserved for a concert when it was performed by the Barcelona Wind Quintet in Vilanova i la Geltrú (Barcelona) for the Saint Stephen’s Day festival in 1951. This programme does not specify whether it was the premiere of this version, but it does dedicate a few lines to the author and the work, about which it says: “...with these instruments he achieves some surprising effects...”, as well mentioning the group’s bassoonist Joan Carbonell, who came from the town.