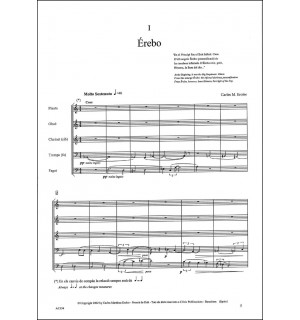 The music of this quintet is clearly thematic and brings together highly chromatic fragments with a profound lyricism.

Erebos is a figure from Greek mythology, who only appears in physical form in the work: Hesiod’s Theogony, in which he plays the role of the personification of hell’s thick mists of darkness.
The work, which lasts approximately twelve minutes, is designed to be programme music, as was so in vogue for Liszt, Berlioz, R. Strauss or even Vivaldi in the famous Four Seasons, writing into the score the storyline that is to be described.
If there is an instrument that stands out in this work, it is the clarinet, which represents the main roles, such as Érebo in the first movement, and Charon in the third. In this final movement, each instrument plays its part as they gradually appear, the bassoon as the lamenting of the souls, the flute as the river Styx and finally the oboe and horn representing the rowers of Charon’s boat.
The vertical aspect plays a less pronounced role in this work, despite its being controlled in order to highlight the lines of counterpoint, the true conductors of the musical discourse. Both the first and third movements have a marked counterpoint style that contrasts with the second, Titans versus Zeus, where I would like to highlight the much more intense and rhythmic character employed.
The music of this quintet is clearly thematic and brings together highly chromatic fragments with a profound lyricism.
At the end of the work, I wanted to pay homage to one of the composers I most admire, H. Purcell, as the last four bars are inspired by the ending to his emblematic work: Dido and Aeanes.