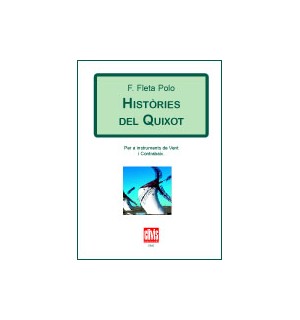 Tales of Don Quixote is a collection of eight musical moments inspired by the various characters of Cervantes’ epic novel. Throughout the work, there appear the serving girl, the judge, Camacho, the university graduate and the priest, among others.

In the generous catalogue of works by Francisco Fleta, there are several pieces whose inspiration lies in the universal classic by Miguel de Cervantes, Don Quixote. As the composer himself has said, “the great thing about this amazing text is that you don’t have to read it from start to finish nor re-read it in its entirety. You can simply open it at any chapter, and sit back and enjoy. Enjoy the language, Cervantes’ words, the ideas that pop into your head, the colours, smells, people, situations... I’m a big fan of “Don Quixote”, it must be said, though not only of the central character –sometimes I feel like a Don Quixote trapped in the body of a Sancho Panza– but of the other situations and characters that appear in it too”. Among his Quixote-inspired works are The Knight-Errant for guitar (ref. E016), The One-Armed Man of Lepanto for saxophone quartet (ref. AC280), the Cervantine sonata for piano (ref. E596), Don Quixote de la Mancha for symphonic band and these Tales of Don Quixote for wind ensemble.
Tales of Don Quixote is a collection of eight musical moments inspired by the various characters of Cervantes’ epic novel. Throughout the work, there appear the serving girl, the judge, Camacho, the university graduate and the priest, among others.
It is written for four pairs of wind instruments and a double bass, which are to be arranged in two separate formations, each comprising an oboe, clarinet, bassoon and a horn. The orchestral texture is thus heard through the dialogue between these two ensembles, which leads to a wonderfully rich tonal effect.
If its colour is one of the piece’s defining characteristics, so too are its use of harmonies and melodies with a real Hispanic flavour, the precise, stirring use of rhythm and the occasional touch of wit and grace, as seen in the large intervals of the calls of the town crier.
The piece is dedicated to clarinettist and director Joan Enric Lluna and his instrumental ensemble, Moonwinds.