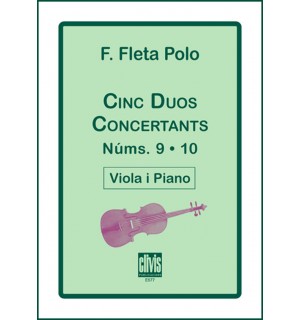 They are short but intense, expressive and idiomatic works which move through different airs, tempos and rhythms. These five duos are dedicated to his good friend and viola performer, Abili Fort.

As a string instrumentalist, F. Fleta Polo has always shown a special fondness of the instruments within this family and they are the protagonists of the majority of his works. In recent years, and particularly since 2005, Fleta has composed a series of duet concertos for string instruments and piano: five for violin, five for viola, five for cello and one for double bass. This is the edition of the Five concertante duos for viola and piano, numbered 6 to 10, as the first five duets of the series are for violin (CLIVIS ref: E594 and E595).