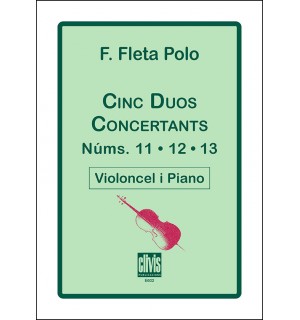 As a string instrumentalist, Francisco Fleta Polo has always shown a special fondness of the instruments within this family and they are the protagonists in the majority of his works. In recent years, and particularly since 2005, Fleta has composed a series of duet concertos for string instruments and piano: five for violin, five for viola, five for cello and one for double bass, all of which have been published by Clivis Publicacions. You are now looking at the publication of the first three of these Five Concertante Duos for Cello and Piano (the other two are published with reference E-603).
They are short but intense, expressive and idiomatic works that move through different airs, tempos and rhythms, and they are all made up of two movements. The author is a real expert in the instrument he composes for and he knows how to exploit its possibilities in a way that is not at all forced. According to the composer “I imagine that each instrument has a particular nature. The violin and the piano are instruments that conjure an air of virtuosity, entertainment and sometimes even a touch of arrogance. The viola however is discreet, wanting to pass unnoticed and inhabiting the background. I see the cello’s personality as being noble and serene; I would actually venture to describe it as a wise man, smoking a pipe. This image no doubt influences me greatly when composing. In the Five Concertante Duos for Cello and Piano this nature is very present: you can note the serenity, the nobility… and perhaps even the pipe smoke!” From the harmonic point of view, these works are in line with Fleta’s personal language, which is marked by his search for a concrete tone that seeks colour over tonal functions. The composer admits to being fascinated by the dominant seventh chord and the minor chord: “These chords have a magical charm and a unique colour and strength. I work more with the juxtaposition of chords than the tonal functions that are traditionally attributed to them, but I don’t follow a rational process: the music flows and takes me towards this tone”.
Duet no. 11 begins with a very intense movement without a single bar of respite for any of the performers, whilst the second is based on an obstinate rhythm. Duet no. 12 opens with the piano solo and constantly plays with generous ascending intervals, whilst the second movement features emphatic polyrhythms. Duet no. 13 starts with an Allegro moderato that contrasts with a very lyrical and cantabile second movement.