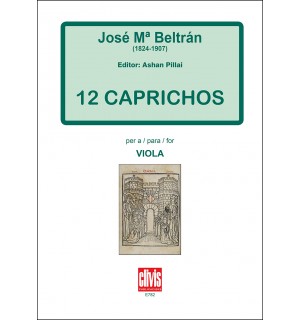 Spanish composer, Jose Maria Beltran Fernandez (1827-1907) was born in Valencia. He was a military musician, forming part of the Zamora Infantry No. 8 (ref. 1860) and later pursued a highly successful and garlanded career as a director of military bands, composer and pedagogical writer. He is principally known for having written the fi rst method of saxophone playing in the musical history of Spain. He also wrote various didactic books for the fl ute and cornet. Two works for piano are also preserved in the Spanish National Library in Madrid. His salon style of writing is charmingly simple and idiosyncratic, based on the popular music of the era.
The Twelve Caprices (originally titled “12 Studies or Capriccios for Viola of Medium Difficulty”) were written for Enrique Scholtz, President of the Philharmonic Society of Malaga. They were fi rst published in 1881 by the Editor, A. Romero, in Madrid, and a copy of this edition is preserved in the Spanish National Library. The original manuscript is presumed lost. It curiously seems to be the only example of writing for a solo string instrument by the composer. Various solo studies for viola have been written in Europe throughout the eighteenth and nineteenth centuries; most notably the Twelve Studies of Franz Hoffmeister (1754-1812, Austria) , the 41 Capriccios of Bartolome Campagnoli (1751-1827, Italy) , and the Twenty Etudes of Maurice Vieux (1884-1951, France). This composition by Beltran is Spain´s invaluable contribution to this distinguished list.
This edition aims to present these caprices as mini-concert works as well as studies which can especially develop double-stop left hand technique and varied spiccato bow strokes. As a musical genre they are totally isolated and separate from the other viola studies written, owing to their idiosyncratic Spanish salon style, notably Nr. 7, Tiempo de Bolero. Each study is a little jewel written in the same A-B-A- coda form. In various caprices the coda is simply a long drawn out variation of the same harmonic chords which could be left open to a certain degree of improvisation.