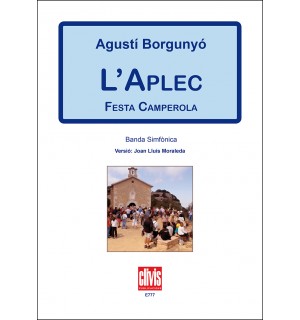 Agustí Borgunyó was a musician with a capital ‘M’ who mainly worked in the United States where he was very highly regarded as a composer and arranger of very varied styles of music: ballets, musicals, arrangements for all kinds of groups, etc. He lived in the USA for 48 years but never forgot his roots. He adored Catalonia and towards the end of his life he returned to live in his native Sabadell, in 1963. He composed more than 150 sardanes and music for cobla bands and also a large number of songs in Catalan. He died in 1967.

The name Aplec stems from the open and Catalan nature of the tunes, with a very populist bent, which are in exquisite taste and treated with a refined counterpoint and rich orchestration.

Breaking the work down into its component parts, we find a first Andante, which initiates the piece by giving a brief introduction to the main themes in the composition. It is followed by a light-hearted Allegro assai which develops the popular theme beautifully, filling it with different instrumental colours and textures. The central Andante contains the most emotional moment of the piece with the fully deployment of the melodic theme insinuated in the introduction. The romantic intensity of this theme is evident in the ascendant, reaching a full musical climax. The final Allegro briefly revisits the first Allegro, brilliantly achieving a successful combination of the main themes at the end.