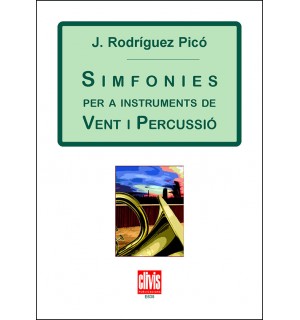 Like works from the Baroque period, it is characterised by its instrumental virtuosity, short structures and highly varied nature.

In 1985 Albert Argudo, who at the time was conducting the Barcelona Municipal Band, asked me for a piece for wind instruments to be opened by his group. In those days I preferred to write works for soloist instruments, selecting instruments from the symphonic band.
In contrast to other compositions from the same period, I decided not to use extra-musical elements and based myself on a work by Stravinsky, The Symphonies of Wind Instruments.
The instrumental group is very similar to that of Stravinsky’s work and also includes two percussionists with the aim of lending a clear rhythmic aspect. In addition to its almost homonymous relationship with Stravinsky’s work, the title similarly has a distant relationship with works from the Baroque period. The pieces that shared this name were characterised by instrumental virtuosity, short structures and a very varied nature.
Although they are written in a single movement, the Symphonies are divided into three sections, beginning with a Moderato movement, a slow Intermedio featuring solos by the clarinets and bassoons and a final Scherzo.
After the official opening performance in 1987 in the Barcelona Palau de la Música (Music Hall), the work was revised in 2009 to mark a second performance (in 2009), delivered by the soloists of the very same Barcelona Municipal Band.