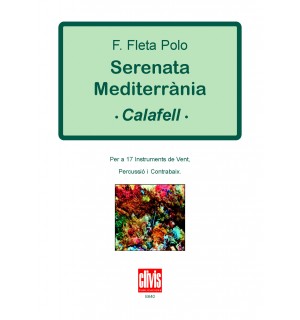 It is a fantasia about the sea, in which the most important features are the dynamics, nuances and inner forces.

Fleta Polo has created works for all kinds of musical ensembles, but wind orchestras have always had a high priority in his creations. Serenata Mediterrània (Mediterranean Serenade) no. 25 Calafell for band forms part of a collection of serenades written for different instrumental chamber ensembles. In this case, the ensemble should have one group of instruments on the right of the stage and another group on the left, so that the sound is conveyed stereophonically.
Francisco Fleta Polo wanted to pay tribute to the town of Calafell, which is where he has spent his summers over the past 40 years.
The composer remarks: “This score incorporates my experiences with the sea, which incidentally are not all good - the swell, the fishermen who are now scarcer than ever, and the constant motion of the sea even though it appears calm. It is a fantasia about the sea, in which the most important things are the dynamics, the nuance and the inner forces that the music passes through, as though being driven by the type of underwater currents that can drag you into the sea even when the surface looks calm”.
The composer, who confesses to having always been a good swimmer, respects the sea and its secrets as much or more than the secrets of music, which as soon as the last note is written on the stave, leave the composer’s hands, going to the performers who are entrusted with leading the piece into a good port.