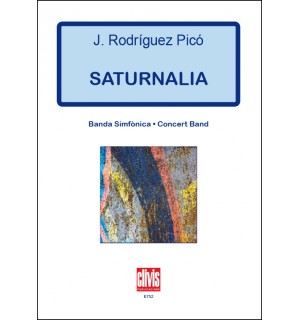 This piece was inspired by different images from Classical Rome related to symphonic poetry and is structured in five short episodes.

The first is the initial Fanfare; the second the ritual Procession; the third movement, the Pueri, is light and playful, then returning to the Fanfare, and finally the Saltatio episode concludes the work, with dance rhythms combining and superimposing different melodies almost like a collage.
The title refers to the festivities that used to be held in Rome at the end of the year in honour of the god Saturn, the festive days after the harvests, and is a possible antecedent of the subsequent Carnival celebrations.
Saturnalia was commissioned by the Barcelona Municipal Orchestra and will be premiered during the 2014-2015 season at the Palau de la Música Catalana in Barcelona, conducted by Salvador Brotons.