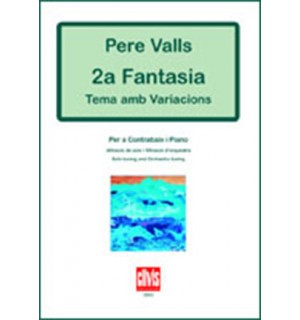 The Second Fantasy by Pere Valls the genre of eshowcase piecef perfectly and is structured around one theme and two variations.

Among the body of music for double-bass produced by Pere Valls, a series of three Fantasies for double-bass and piano, composed between 1894 and 1917, is what most attracts our attention. It was during this period that he settled in Barcelona for good (after a five-year stay in Argentina) and earned himself a reputation as a double-bassist, playing in all of the cityfs orchestras. The Second Fantasy the genre of eshowcase piecef perfectly and is structured around one theme and two variations. The piano provides the rhythmic formula that holds the piece together, while the double-bass enters immediately with a cadenza that serves as a prelude to the piecefs first section. The main theme ?which combines playful touches with a warlike feel? is heard later on and is followed by two virtuosistic variations. Next, an Andante cantabilefragment paves the way for the most lyrical section of the solo part and a coda revives the initial rhythmic formula to build up to a spectacular finale.