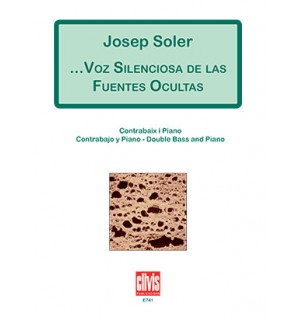 Here, from the first strains, the undulating tempo of the double bass and the piano is driven by the constant instruction of the rubato.

Four Pieces for the Double Bass (2010) was, until now, the only work written by Josep Soler for an instrument that very rarely has an audience for its deep tones. This does not mean that he had not used the musical resources of the double base earlier on in his tireless work; for example in Oedipus and Jocasta (1972), where four double basses with a mute attack, along with an organ, the final strains of the tragedy, and again in the end of the prelude of Jesus of Nazareth (a work he began in 1974) which concludes with a chord of four double basses in natural harmonies, and also at the end of the fi rst scene of Act II which closes with a double bass solo – once again with a mute.
Here, from the first strains, the undulating tempo of the double bass and the piano is driven by the constant instruction of the rubato. The journey, patient, incessantly delays its arrival as if it already knew that there is nowhere to get to; that there is no arrival because everything is about the journey. Slow; after a fleeting instant of disquiet, the poet asks for serenity. He, by naming the sacred, sets the stage. The translator/interpreter will need to be a faithful echo of the poet, just as the poet is an echo that responds to the silent voice of the being.
The silenced has a voice, and this voice takes us closer to the abyss. Anyone who has never been that close will not have experienced the essential anguish, that which before the voice of the being does not fear to say yes. Who says yes and dares to think, obeying that voice that seeks the truth for itself. But in the depths of the springs, it does not even touch on our descriptions: the performer who takes this score as such will be desecrating it, and will also be desecrating his own destiny as a custodian of the silent voice, at once strange and essential.
And the music: who will be brave enough to try to discover what is hidden, if only the signs hold this information, and only in the signs is the word that could open up our path concealed? (J. Soler in Musica Enchiriadis, 2011).