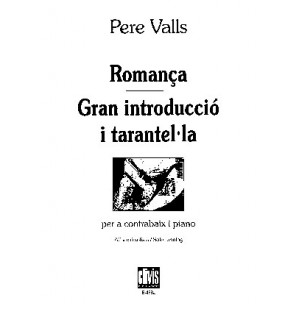 Romance has strong Catalan roots in which harmonic accompaniment plays an important role. Great Introduction and tarantella is a young work written long before Romance in honour of his idol, Giovanni Bottesini.

With this edition, we would like to recover two short works by Pere Valls, Romance and the Great Introduction and tarantella, associated with two artistic figures who were important in his life.
Romance is associated with Pau Casals, due to the huge admiration the composer had for his teacher. Valls was the first double bass in the Pau Casals Orchestra and he taught him composition. Due to his teacher’s praise of him, Valls made a gift to him of the cello and piano version he had composed expressly. This copy is preserved in the material left to the National Archive of Catalonia. In contrast to the Andalusian Suite, Romance has strong Catalan roots in which harmonic accompaniment plays an important role.
Great Introduction and tarantella is a young work written long before Romance in honour of his idol, Giovanni Bottesini. Nobody can deny the similarity to Bottesini’s Tarantella, but we cannot for this reason underestimate Valls’ own characteristics that make the work interesting.
Since double bass players have lost the custom of reading in royal octave, the score (E498a) presents a double bass in suono reale and another as written in orchestral literature, in other words, one octave higher than it in fact sounds. The edition of the score (E498b) is also presented with the piano transposed to a lower key to play the work with the orchestra tuning (Sol-Re-La-Mi), and with the above double part.
Also available from the same composer is the work Great Indispensable Concert for Double Bass and Orchestra.