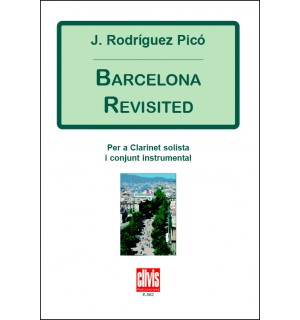 In Barcelona Revisited, the idea of movement and shifting runs throughout the piece and this forward motion is the reason for the choice of musical matter and its transformations.

In 2005 and 2006, fifteen years after composing two concertos for clarinet and orchestra (1989 and 1990), Jesús Rodríguez Picó wrote another two works for solo clarinet, but this time accompanied by a smaller ensemble: a Concertino per a clarinet i cordes (Concertino for clarinet and strings) and the work that we are presenting here, Barcelona Revisited for solo clarinet, oboe, bassoon, trombone, piano and strings.
We must remember that Rodríguez Picó is a trained clarinetist, as is the American composer John Adams, which is why the formation required in Barcelona Revisited is very similar to that used by Adams in his 1996 work Gnarly Buttons, for clarinet and an instrumental group. Not only does it hint at Adams’ work, but there are also elements related to the clarinet music of German classical composer Carl Maria von Weber.
Barcelona Revisited developed from a text by Portuguese poet Fernando Pessoa, contained in Poemas de Álvaro de Campos. The title of one of these poems is Lisbon Revisited, which contains the phrase at the top of the music: “Ao volante do Chevrolet pela estrada de sintra”. The idea of movement and shifting runs throughout the piece and this forward motion is the reason for the choice of musical matter and its transformations.