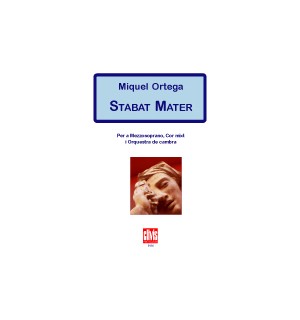 Stabat Mater was influenced by the choral techniques that the author learned from maestros Gandolfi and Sicuri, to whom he dedicates this piece, and also the knowledge he acquired at that time from choral works such as Carmina Burana by Carl Orff, amongst others.

The year 1982 left a tremendous impression on me in terms of performance, as the maestros Romano Gandolfi and Vittorio Sicuri joined as senior and assistant conductor, respectively, of the choir of the Gran Teatre del Liceu of Barcelona. Gandolfi had been the director of the choir at the Scala in Milan during the time of artistic director Claudio Abbado and was justifiably acclaimed. I had been the pianist in the Liceu choir since 1980 alongside director Riccardo Bottino, and I continued as such with these two maestros. Gandolfi very quickly gave me great freedom and confidence by appointing me deputy director of the choir and under his influence I wrote the choral work Stabat Mater for mixed choir and wind orchestra (20 instrumentalists). At the time I was just 19, and it never got to be played, sitting for the next 29 years in a file.
In 2011, the Cappella Gedanensis (chamber orchestra and choir) of the Polish city of Gdansk invited me to conduct a concert of my own works  though we also performed a work by Lluís Benejam and another by Josep Maria Pladevall  and asked for a choral work for a mezzo soloist, as the Polish mezzo Monika Czalej, living in Catalonia, had to be the soloist at the concert. I remembered the Stabat Mater and I recovered it from the 4rejects file. As I was quite pleased with it, I made a few modifications which involved completely changing the orchestration by adapting the template to that of the Cappella Gedanensis  two flutes, one oboe, two trumpets and strings. At the same time I took the opportunity to improve its structure by lengthening it slightly, mainly because it was lacking links, transitions between certain episodes, and also because the final coda was too short, it arrived to sharply and suddenly. The work was premiered in Gdansk on 29 October 2011 in the Artus Court hall.
As I mentioned earlier, this work was influenced by the choral techniques I learned from maestros Gandolfi and Sicuri, to whom I dedicate this piece, and also the knowledge I acquired at that time from choral works such as Carmina Burana by Carl Orff, amongst others.