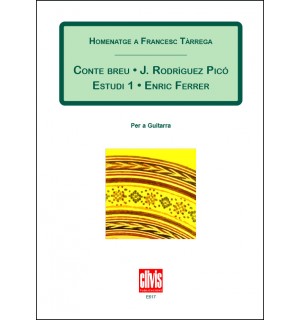 These two pieces for guitar to mark the centenary of Francisco Tàrrega were commissioned by the guitarist David Sanz. Conte breu (Short story) the virtuosic nature by use of fast notes and the oriental motifs that Tàrrega used in some of his works; and Estudi 1 (Study 1) there are some quite rhythmic, dancing passages, but it also has some lyrical and introspective, as well as dramatic, moments.

The guitar is an instrument that has won me over little by little it is like those friendships that begin to take root and become deeper and sounder without one even noticing. And suddenly, you realise that you love this instrument.
I was introduced to the guitar by David Sanz, who not only introduced it, but actually explained it to me, and who has been kind enough to dedicate more than four sessions to me, going over the works that I have been writing, partly thanks to him, in which the guitar plays a part.
The first piece was Llacada for flute and guitar, (CLIVIS ref.), a work which David Sanz and Jordi Gendra asked me to write. I have written the odd work that has included a guitar part, but this Estudi 1 was also commissioned by David, to whom I have dedicated it. He asked me to write it for the centenary of Francesc Tàrrega.
Whenever I have had the opportunity to write a composition as a homage to one of the maestros of the past, I have always tried to write a piece that the composer in question would have liked. In this study, there are some quite rhythmic, dancing passages, but it also has some lyrical and introspective, as well as dramatic, moments.