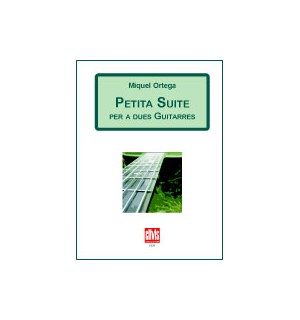 Petita suite per a dues guitarres

To create the work Petita Suite for two guitars, Miquel Ortega reused the thematic material of seven of the twenty songs making up Les Quatre Estacions (The Four Seasons) collection based on texts by the poet Josep Carner.

I got the idea for writing a piece for two guitars from guitarists Joan Benejam and Xènia Axelroud, who I had conducted in a concert in Barcelona at the Palau de la Música, where we performed Joaquín Rodrigo’s Concierto Madrigal.
I was very keen to write for guitar again. Up until then, I had only written one early piece for this instrument, the Sonata for guitar, which dated back to the early 1980s, meaning that some twenty years had passed since the last time I wrote for the guitar.
Just as I did when I wrote the Simfonieta (Little Symphony) for strings, when I revisited and reworked an existing piece, I reused the thematic material of seven of the twenty songs making up Les Quatre Estacions (The Four Seasons) collection based on texts by my much-admired poet, Josep Carner. The same song (Obsessió Lunar, Lunar Obsession) that served as the basis for Simfonieta is present within the Petita Suite (Little Suite), appearing as the fourth movement, and labelled Arioso. All this is by way of saying that these three pieces –the collection of songs, the Simfonieta and the Petita Suite we are presenting here–, are interconnected in a way reminiscent of Malher, though more in conception than in style. The other pieces in the Suite correspond to the following songs from the collection:

This piece was performed for the first time not long after it was written at a concert held in 2003 in Moscow by musicians Joan Benejam and Xènia Axelroud, to whom the collection is dedicated.