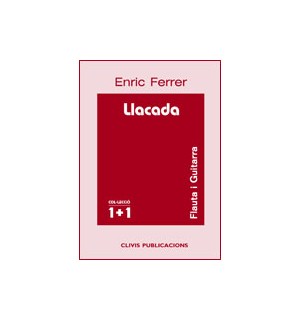 Llacada, or Silt, is a piece for flute and guitar by Enric Ferrer; Silt is also the residue left behind by floodwaters as they drain out of flooded fields. The author dedicates this work to David Sanz and Jordi Gendra.

Llacada, or Silt, is a collection for flute and guitar and it is my absolute pleasure to dedicate it to David Sanz and Jordi Gendra. I also wish to thank them not only for having debuted the collection what must be four years ago now, but also for their invaluable contributions. I would like to make special mention of the four occasions on which David has sat down to review the edition you have before you, thanks to which immeasurable improvements were able to be made to the collection, if only in terms of its interpretation. His contributions will undoubtedly mean that my music will be heard by listeners with greater fluidity, and that any musician kind enough to study it, and interpret it, can be safe in the knowledge that the collection is at the very least instrumentally viable. I, of course, expect and hope that this also proves to be the case on an artistic level.
Silt is the residue left behind by floodwaters as they drain out of flooded fields. I believe this to be comparable with the sensations I felt and the more or less conscious intentions I had in mind when creating it: after overcoming a frankly rather major crisis, there is this feeling of exhaustion, a sense of having left energies behind that can never be recovered. A kind of emptiness, and a sadness... But there is also a sense of hope, of pride at having overcome it, of happiness, even, if you want to see like that. It is an emotional state full of contradictions, fully aware that what is passed will never again come to be, while also approaching the future with a certain level of enthusiasm and positive thinking.