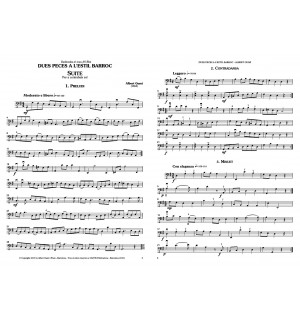 The Suite and Variations were both written in Baroque style for educational purposes.

Both pieces are dedicated to my son Blai and form part of a whole series of short pieces composed for him in an attempt to fi ll the gap in the original repertoire for the elementary grade in his instrument, the double bass.
The Suite consists of a prelude and five dances in Baroque style and is intended to give young players a closer insight into the fantastic world of suites for solo instruments at that time, which culminated in the incomparable suites for unaccompanied cello by Johann S. Bach.
The Variations on La Follia comprises one theme, seven variations and a coda on the very popular melody of the La Follia, following the structure of Baroque variations. The piece can be played by a single double bass or accompanied by a guitar, piano, clavichord or any other harmonic instrument. Following the Baroque tradition, we have presented the harmonic accompaniment in fi gured notation so the accompanist can adjust it at his/her discretion.