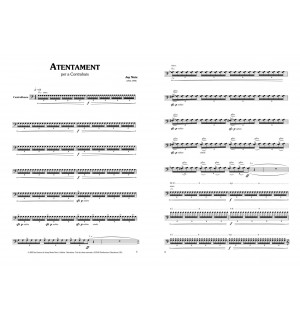 The work begins with a single idea, a unique effect that is exploited to the full.﻿

Composers always like to meet good performers since these instrumentalists not only stimulate their creativity but also guarantee good performances of their works.

Jep Nuix has many works dedicated to specific instrumentalists and it’s quite fascinating, being himself a flutist, his interest for the double bass. One immediately thinks of four names being both, motivation for composing and interpreters of the works here presented: Daniel Machado, Enric Ponsa, Rafael Esteve and Corrado Canonici.

From this starting point comes out a thorough investigation on the double bass sound possibilities: simultaneousness of pizzicato and bow, glissandos, harmonics, tremolos... all tested and agreed with the performers.

But all these interpretative considerations do not hinder Jep Nuix’s freedom of creativity. On the contrary, every one of the precise suggestions he gets from the instrumentalists gives him a wider quote of freedom and, even more important, he immediately knows how to use these options for his creativity. So the surprise is that the resulting works come through without any kind of restriction. The long and deep author-performer talks do not cause any deviation or any ill effects, and the music simply flows.

The play Atentament has a very different initial approach than the work Gallinària. It’s a more technical, more mental and, as it’s typical in Jep Nuix’s works, very progressive. The work begins with a single idea, a unique effect to be exploited to the limit submitted to progressive changes.

It is impossible to start with less material, with only one note, in a passage that, although it’s all marked in the score with absolute precision it’s really no more than an effect to see how far you can force a double bass note before it breaks or before it becomes devoured by its own harmonics.

And, after investigating on just one note... two notes! And then the octave, the double octave... to continue exploring all type of sounds: playing near the bridge, killing the fundamental, alternating arch and pizzicato, simultaneous glissandos and tremolos, quarter-tone notes, progressing from sul tasto to sul ponticello, col legno...

And we could go on with this litany describing all the fantastic possibilities of the double bass... but there comes a crucial moment: when you stop thinking about how everything is being conceived and displayed to restrain yourself only to music listening. There is a moment when you give up analyzing and trying to recognize what is happening in the score and how the composer manages to achieve such a wide variety of sounds ... to go on just listening to those sounds no longer perceived as merely technical but as acoustic sensations.

It is the technique at the service of music and not vice versa. At the end the applause rewards the performer’s skills in resolving the complications he has faced but, at the same time, to the music for being so clear and easy to listen. Is difficulty serving simplicity and complexity serving the listener’s most basic sensations and pleasures.