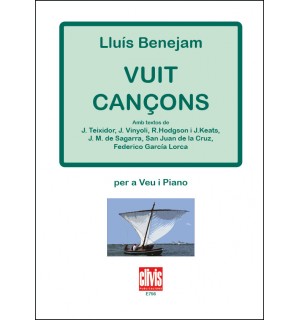 These songs of Lluís Benejam are highly elaborate pieces with tremendous sensitivity and the firm intention of creating little chamber music gems that shine a spotlight on the lyrics, supported by rich harmonies and a highly complex piano score.

The writers of the texts were some of the greatest Catalan poets, including Josep Maria de Sagarra, Jacint Verdaguer, Joan Maragall, Joan Vinyoli, Joan Salvat Papasseit, Joan Teixidor and Miquel dels Sants Oliver, as well as leading poets in the Spanish language such as San Juan de la Cruz and Federico García Lorca, and two British writers, Ralph Hodgson and John Keats, translated into Catalan by Marià Manent. The catalogue of Benejam’s pieces for voice is rounded off by a piece for four mixed voices and harp based on a text by Tomàs Garcés: Cançó de bressol de la Verge (The Virgin’s Lullaby, 1953) which was dedicated to the Quartet Filharmonia.
The exact date that these songs were composed is not known for sure, though we can surmise that all of them were written in Barcelona before 1954. It seems that the two songs Despedida (Farewell) and Al estanque se le ha muerto (Death at the Lake) (from Nocturnos de la ventana, Nocturnes from the Window) based on writings by García Lorca might be from his North American period, but there is no documentary proof of this. Whatever the case, we know that the first one was Cançó de rem i de vela (The Rowing and Sailing Song) which goes back to 1944, followed by a group of six songs which were written before 1949: Cançó de la sirena (The Mermaid’s Song), Cançó de fada (Fairy Song), El misteri (The Mystery), Donant les joies (Giving Joy) and Mester d’amor (Master of Love). Of the rest – Maledicció amorosa (Loving Curse), Les noies a la tardor (The Girls in Autumn), Cántico spiritual (Spiritual Hymn), La rosa marcida (The Withered Rose) and Lo sant nom de Jesús (The Sacred Name of Jesus) – we have no definite dates for either their composition or the first time they were performed.
These songs are published on the CD by Picap (2014) and performed by mezzo-soprano Marta Valero and pianist Albert Guinovart who, together with Abili Fort and Josep Maria Serracant, made an exhaustive review of the works to provide the most accurate version.