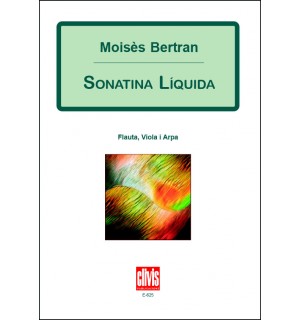 The Prelude and Dance follows a typical structure of Frederic Monpou, and the Finale closes the work.

Sonatina Líquida (Liquid Sonatina), for Flute, Viola and Harp, was written in December 2006.

It consists of three movements: Prelude, Dance and Finale. The first two movements were conceived in line with the “Song and Dance” structure, which is typical of Frederic Mompou, and the third movement rounds off the wonderful three-part structure.

The Prelude mainly centres on a simple hexatone collection of notes (C, D flat, E, F#, A and B flat) which form both the harmonies and the simple main melody. The Dance, which also uses the same collection of notes as the Prelude, creates music that uses a hypothetical sardana (traditional Catalan dance rhythm) as its inspiration. The Finale, working with the opposite hexachord, presents an ABA form, in which the outer (A) sections develop the initial tone of the Prelude with the harp tremols. In contrast, the central music (B), displays the trio in a series of tonal games which are also quite different from one another. The final tone of the piece takes us back to the beginning of the Sonatina.