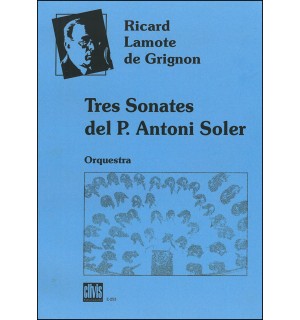 The first experience as a composer Ricard Lamote with early music was in 1926 with the work in Suite a l'antiga (Early Suite). Twenty years later he returned to work with the music composer of the eighteenth century, Antonio Soler, instruments three of his sonatas that titled as Three Sonatas by Antonio Soler. David Puertas says in his book Notes de Concert, "instrumentation for symphony orchestra of original works for harpsichord required dosage of timbres that could only be available orchestrate a top level". The work was premiered by the Orquesta Municipal de Barcelona (now OBC) in 1957.