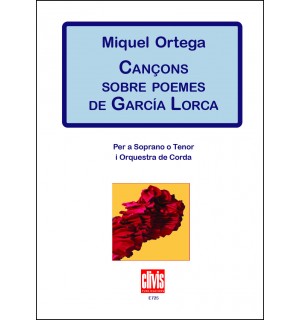 The four Cançons sobre poemes de García Lorca (Songs on poems of García Lorca) by Miquel Ortega are written in a style that we might call post-falla, with evident Spanish roots, essentially Andalusian, given the nature of the poems.

García Lorca, along with Antonio Machado, Joan Salvat Papasseit and Josep Carner, is one of my favourite poets, especially when it comes to putting the verses to music. Ever since I was a teenager I have never been able to hide the devotion and empathy I feel towards Lorca, his life and his oeuvre. Between 1992 and 2004 I set sixteen of his poems to music and created an opera from his work La Casa de Bernarda Alba.
These four lieders, which are usually performed as a small cycle, were originally written for voice and piano, like the others, but I later orchestrated them at the request of the renowned baritone Carlos Álvarez, who has sung them on numerous occasions and also recorded them on the album dedicated to Andalucia (also the name of the disc) under my own musical direction at the head of the Malaga Philharmonic Orchestra. At the end of 2011, the Polish mezzosoprano Monika Czalej, a highly respected performer of Spanish music, asked for a version for a chamber orchestra, which ended up being written, under my supervision, by the young composer and conductor from Malaga, Arturo Díez-Boscovich. I had the privilege of conducting the premiere of this new version in the Polish city of Gdansk, performed by Cappella Gedanensis. The four songs are written in a style that we might call post-falla, with evident Spanish roots, essentially Andalusian, given the nature of the poems, which are: Romance de la luna, luna and Preciosa y el aire from the book Romancero Gitano; Memento, from Poema del Cante Jondo (the most frequently-performed of my songs so far, having been recorded at least three times) and Canción del jinete, from Canciones.