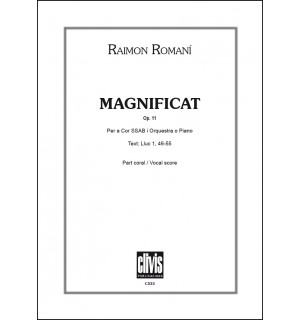 [Purchasing this item provides you a licence to make 12 copies of it] The Magnificat is based on the Gospel of Luke, in which the Virgin praises the wonders of the creator and refl ects on his people’s history.

It is divided into 7 parts, sub-dividing the text into thematic units. Musically, each part is self-contained, in tune with the expression of the text being sung. As is traditional, the last number is the doxology Gloria Patri.
The work was composed during the summer of 2008 and premiered in the spring of 2009 in Reutlingen (Baden-Württemberg, Germany). The performers were the Choir and Orchestra of the Conservatory of Sant Cugat del Vallès and the Junges Ensemble from Reutlingen.
Intermediate level of diffi culty for both the choir and orchestra.
The work is for choir SSAB without soloists and it is specially designed for youth choir, with one male voice which avoids extreme registers.