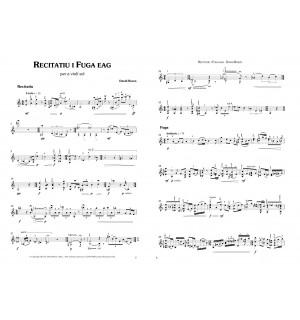 Recitatiu i Fuga EAG (Recitative and Fugue EAG)
The work was composed from April to May 2010 and is dedicated to who was my violin teacher for 4 years in the Conservatorio Superior de Música Salvador Seguí de Castellón, Eduardo Arnau. It was revised by the violinist Francisco Jimeno who also premiered it in 2012.
Each movement begins with the set of notes E, A and G, corresponding to the initials of Eduardo Arnau Grau. In addition, the lutheran chorale that interrupts the fugue, Herlich thut mich verlangen, also begins with the same set of notes.

3 Laments o Elegia (3 Laments or Elegy)
The work was composed from June to July 2012 commissioned by the violinist Francisco Jimeno, within the framework of our collaboration, who also revised and premiered it.
3 Laments o Elegia is an enigmatic work. The work process leads Francisco himself to this reflection: “We don’t know what laments the composer, but it is clear that he talks with himself in an attempt to understand the nature of his pain. What is dead into him that he needs to sing it? Every lament is an evolution in the path that will help him to assimilate his loss.”